Cheryl Walsh has written a fairy tale about her journey of transformation. Coming to embrace that she sees life through the Type 4 lens, and working with that understanding, Cheryl has experienced such growth.

Once upon a time, a baby girl was born into this world.  She had lived in another  place with the Eternal One who is Love before she came to earth.  In the beginning when she was very, very young, she remembered this place and her connection to Love.  She smiled and laughed and shared her joy with everyone around her.

But she soon discovered that the world was not always a safe place to be and things happened that made the little girl afraid.  She tried to use her voice to speak her truth but sometimes she was not heard.  She began to lose her memory of her connection to that special place where she had known the Eternal One and basked in Love.

She began to wonder who she really was and where she fully belonged.  As the years went on she looked to the other people in her life to tell her who she was.  She tried to fit all these expectations.   She felt different from other people and very, very lonely at times.  She was often conscious of a gnawing longing for something that she couldn’t quite name.

As she grew into womanhood on the outside, inside she was still the little girl who desperately wanted to be loved and cared for.  No matter how much love she had in her life, there never seemed to be enough of the special kind of love she longed for.  She was always yearning for that special connection.   And she lived with two terrible secrets…  there was something very wrong with her, and if anyone really knew her, they would certainly never like her and would reject her.

She tried to keep her heart safe so that she could not be rejected.  However, at some point she always gave in, and opened her heart very wide, and let all those feelings and emotions and yearnings pour out into someone’s hearing.  Perhaps this time, the young woman thought, I will find my special connection.  But, often times her tender heart was trodden on, and bruised, and the special connection continued to elude her.

There was a voice in the woman’s head that was harsh and loud and said mean things to her.  She forgot when this voice had first started speaking, but it seemed to have been with her for a very, very long time and never really went away.  She often compared herself to other people and wondered why she was so much less capable, clever and beautiful than everyone else?  This ruminating caused her to doubt herself, to lose confidence in herself and to see herself as less than others.  She worried constantly that she was not good enough, smart enough, pretty enough, loveable enough… the list seemed to go on.  Everyone else had so much more of everything than she had!

Sometimes these thoughts consumed her attention and her energy.  The years went by and she was never really happy with the reality of her life in the here and now.  There was always that nagging feeling that the best was still out there.  How was she to find it?  Would it elude her forever?

She tried doing inner work, she journaled, she talked with counselors, prayed, read, thought, and thought some more.  Sometimes she saw glimmers of her own truth and the pathway to healing and wholeness.  But somehow it wasn’t quite enough, and it never really seemed to last.  She would start wandering again in those familiar thoughts and patterns of behaviour that she had always known.  Maybe this was simply all there was, she would think to herself.

Then one day, as she was teetering on the threshold of the third phase of life, the woman happened to see an invitation to a series of workshops on the Enneagram.  She thought she had discerned her “type” many years earlier, but now suddenly she was not so sure.  What a scary, scary feeling this uncertainty was!  She took her courage in hand and decided to step out.  She registered for all of three of those workshops!

The woman arrived at the first workshop where she met several other brave souls who were on the same journey of self-discovery and transformation.  As she listened to everyone tell their story, she cried many tears.  Tears of compassion and tears of empathy, tears of laughter, and by the end of the day, tears of fear, because she simply did not know who she was.   She was held in sacred silence and acceptance by the group as she shared some of her own story and tried to understand  who she really was.  That clarity eluded her that day.

But … she returned for the next workshop, and the next.  Listening to the stories of others helped her to understand her own.  By the third meeting she had found her true self.  What a homecoming it was!  There was great joy and freedom within her.  For the first time in her life she could truly say she loved herself and she knew herself to be the Beloved of the Eternal One who is Love.  This was where she had come from.  Everything made sense!  She understood why she did what she did all her life!  Her heart opened up with compassion for herself and for all the others in the room and in her life, for they too, had their own struggles and challenges.

The woman discovered a special name for herself- a sacred name.  She practiced it everyday and looked in the mirror so she could tell it to herself.  The sacred name was “sweetheart”.  When things did not go well and she found herself falling into some of those terrible habits and behaviours that she was not proud of, she talked gently to herself and said, “It’s ok, sweetheart”.  She knew she was not bad, or stupid.  She was just human, and could try again.  There were new habits and behaviours she could choose to practice, new ways of being.  The harsh voice inside her head was still there, but sometimes it was not so loud and  she could speak over it now, with a gentler voice of love.

She was so, so grateful to the two women who had facilitated the workshops and created the safe and sacred space for her to discover herself, who accepted her as she was, and were gentle with her tears.  They rejoiced with her over the new creation who she was and cheered her on.  Here was a community where she did belong–  not because she was like everyone else, but precisely because she was herself!

At first she thought these women were her very own fairy godmothers, but when she really thought about it… she realized they were actually much more than that.  They were spiritual midwives.  Not just for her, but for all the seekers who came looking for truth and authenticity through the self-awareness found through the Enneagram.  These midwives were helping her and all of the other seekers give birth to their authentic selves!  How wonderful!  How empowering!  How freeing!

Is the woman living happily ever after?  Well … she is living more honestly.  She is believing in herself.  She is choosing to face her fears with courage and move forward anyway.   Sometimes she is still lonely, and yet, she realizes there is a certain kind of grace and strength that comes from being alone.  When she finds herself yearning for love, she remembers the life-giving power of the Love that is  self-love.  She is embracing life in all of its reality, just as it is, understanding that it is a fragile and precious gift.  Most importantly of all, she knows that true happiness is a choice.

And so, yes, she is choosing to live happily ever after!   And this is not the end of the story, but a new beginning! 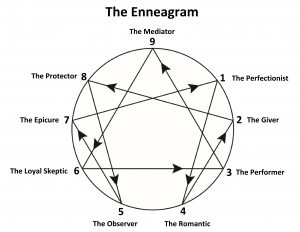 Location
Based in Acton, ON
And willing to serve the world!